Get your book published and distributed with Newman Springs Publishing, the one-stop solution for serious authors. We distribute books to tens of thousands of bookstores and bookseller outlets throughout North America and internationally. 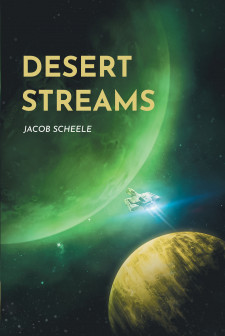 Recent release "Desert Streams" from Newman Springs Publishing author Jacob Scheele is a captivating space adventure that follows Leodhas, who is wanted throughout the known galaxy for a lifelong series of petty crimes.

To clear his name, Leodhas takes a job from the seedy leader of a backwater independent planet to kidnap and deliver a regal ambassador, Eilidh, who represents a powerful galactic confederacy. Sneaking his way on board her personal ship, Leodhas finds that he is not the only one interested in stealing away the confederate ambassador.

The Conglomerate, a rival power encroaching from the other side of the galaxy led by the vile governor Edax, wants to use her as a bargaining chip in their twisted game of interstellar politics. Narrowly escaping the governor's clutches, Eilidh learns that her rescue by a seemingly courageous soldier turns out to be a thinly veiled plot to sell her off for freedom throughout the independent systems. However, when the Conglomerate beat them to their rendezvous, Eilidh and her captor learn that they will have to work together to keep her away from those who want to capture her and kill him.

Author Jacob Scheele takes readers into the engrossing world of his story, writing, "In the reaches of galactic independent space, a vessel succumbs to a surprise attack by a hostile force. As that force began to engulf their prey in a tractor beam, soldiers' feet clamored on thin deck plating on the way to their defensive positions. Noises filled the stale air of the pristine white ship bathed in red light from the emergency alarms that had been triggered not long ago by an incoming enemy vessel. Usually, a battle station meant manning a terminal that would fire on the opposing ship, but this time was different. Taking aim at the blast door which connected to the loading umbilical, commanding officers yelled their orders as the last of the men made it to their places."

Readers who wish to experience this thrilling work can purchase "Desert Streams" at bookstores everywhere, or online at the Apple iBooks Store, Amazon, or Barnes & Noble.

Get notified about new releases.

Sign up for email updates from Newman Springs Publishing.